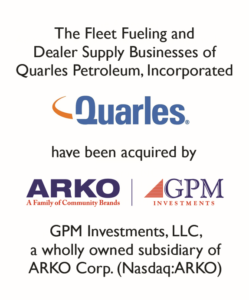 Quarles was founded in 1940 by Douglas Quarles Sr. and his son, Douglas Quarles Jr. by purchasing The Home Oil Company in Warrenton, Virginia. Over the next 40 years, the Company expanded into new regions in Virginia and acquired a storage terminal in Spotsylvania County, Virginia, providing a connection to the Plantation Pipeline. In the 1980’s, Quarles began opening cardlock fueling locations and convenience stores, and the Company also entered the propane business. In the two decades that followed, the Company opened a total of 31 Q-Stop convenience stores before selling them to 7-Eleven, Inc. in 2010 to focus on the delivered fuels and fleet fueling businesses. Under the leadership of the current management team, Quarles has grown significantly over the last ten years through the continued development of its cardlock network and fleet fueling program, as well as several acquisitions of propane & refined products distribution companies including Whiting Oil Company, Northern Neck Oil Company, Northern Neck Gas, Revere Gas Company, Dixie Gas & Oil, and the propane assets of PAPCO, Inc.

On June 1, 2022, Quarles sold its propane, heating oil, and commercial fuels distribution business to Superior Plus Corp. At the time of the sale, Quarles was one of the largest propane and refined fuels distribution companies in the U.S. and served over 80,000 residential and commercial customers in Virginia, West Virginia, Washington, D.C., Maryland, Pennsylvania, and North Carolina through a network of over 30 bulk plants and one of the largest fleet fueling networks in the country. The closing of this transaction with GPM represents Quarles’ final exit from the petroleum marketing industry.

Paul Giambra, CEO of Quarles, commented, “The Matrix team was instrumental in leading the Quarles organization through the process of marketing the business, finding the best value for each line of business as well as guiding us through the complexity of a multiple buyer sale process.“

Mr. Saunders added, “This has been a very complex, bifurcated sale process, which was structured to maximize value and deal terms for the shareholders. We appreciate the opportunity to advise such a great company on their final exit from the industry.”